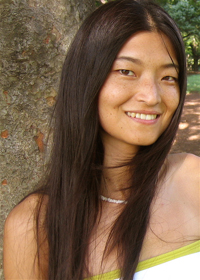 While she was a fashion model, Josi Vallicherry, a yogi from southern India, While she was a fashion model, Josi Vallicherry, a yogi from southern India, introduced her to Raja yoga and Bhakti yoga. She added the depth into her practice by learning Sivananda yoga and meditation methods from Francois Chaillou, who once a Sivananda yoga teacher and later became a monk training in the woods in Thailand, and also by learning yoga philosophy and pranayama from Emil Wendel. After learning various styles of Hatha yoga, she took the first step of teaching yoga in 2002 to share her experience which she got from her daily practice.Currently she is conducting regular classes in Tokyo cosmopolitan area including Yoga-One Tokyo, is organizing various workshops and retreats all over in Japan. She is in charge of special workshop at Sivananda Yoga Japan from 2011 and is one of the faculties of the Teacher training course at UNDER THE LIGHT YOGA SCHOOL. Her strong interest in the environmental matters as well as human rights brings her into activities and events for the theme of earth and environment.Officially certified Sivananda yoga instructor. Officially certified Aayurveda lifestyle counselor of Japan Aayurveda School.

Always YogaFest is something special to me. I look forward to seeing you all at YogaFest!