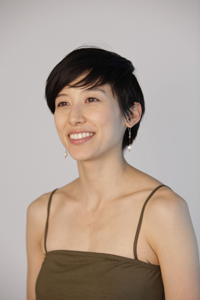 Born in 1980.She started her carrier as model with a magazine "Soen" at the age of 14. She enrolled in International Christian University in 1998. While she was studying there, she enjoyed an advertisement, TV reporter, and writing, not only a fashion model. She met with "Ashtanga Yoga" in 2001. She has been studying under the guru of India Mysore,Mr.シュリ・K・パタビジョイス since 2004. She become the first Japanese woman who obtained Ashtanga Yoga formal instruction qualification in 2006. She become the first Japanese woman who obtained Ashtanga Yoga formal instruction qualification in 2006. In 2010, she got Level 2 of it. She is continuing the cover model since she was selected as cover model of 「YOGINI」 Magazine in 2004. The series essay which tells her life style to pursue the way of life which was able to take harmony with nature in the magazine is popular, and she has gained popularity from natural-oriented women. Mei Inc. was established on the theme of "returning to society through yoga" in the same year. She opened a concept studio "veda (Veda)" at Omotesando,Tokyo, as a place of the center of her activity in March 2011. The studio is the place where tell and share "heart of yoga" not only physical method, and she is producing various programs for health, improving lifestyle, and is dealing with the production of a community where conscious modern people will be together. http://www.maeyoga.com/
http://www.vedatokyo.com

Having your consciousness and listening to breathing, the body, and the heart is giving tremendous power! Let's enjoy a big YOGA event together once a year.